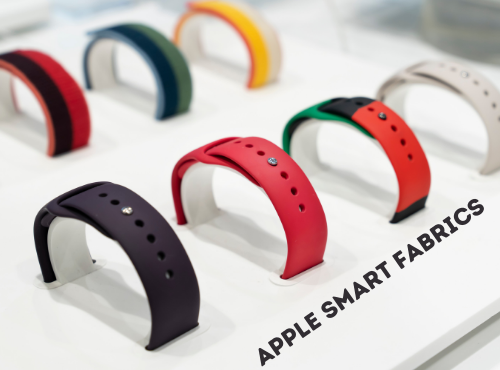 Apple smart fabrics has been expanding its ecosystem over the years, with connected smartphones, watches, and home assistant devices.

Now, the tech giant is said to be working on a technology that can weave sensors into the fabric. So that it can be used for furniture, clothing, smart bags, and more.

Apple Smart Fabric is in the works

Apple has presented patents in the past, including patents for creating fabric buttons that can be sewn onto HomePods. According to Apple Insider, a new patent shows several uses for smart fabrics with sensors and other devices.

The tech giant spawned the idea of ​​a fabric-driven device with previous patents showing the woven bands or buttons of a smart Apple Watch.

However, the latest patent shows just how much further the company is willing to go with this proposal.

Also read: This solar-powered smart fabric will keep you warm in winter

The patent indicates that the smart fabric could be used to form furniture, clothing, bags, electronics, and other items, according to TechRadar.

The patent focuses on ensuring that the smart fabric works properly. After listing every conceivable type of electronic device, the patent goes on to provide more identifiable and specific fabric use items.

According to the patent, the smart fabric can be a strap, wristband or headband, or a removable case for a device, case, or bag with straps.

The patent describes the smart fabric as soft, but it can also be coarse or smooth, depending on the item it will be added to.

The surface of such fabrics may be formed as part of an article or appliance. Having parts made up of metal, glass, plastic, ceramic, crystalline, or other materials.

Apple considers fabric to be used to wrap around devices and items. An example in the patent is a drawing of remote control.

The tech giant claims that the fabric item could include a smart fabric cover, according to The Washington Post.

Areas of smart textures can overlap input circuits such as touch sensors, button switches, force sensors, proximity sensors, other sensing circuits, and other components such as tactile output devices and luminous components.

The tech giant has been granted a patent that allows a Mac to be controlled via a smart glove. The new patent extends that scope to anything that can be wrapped in a smart fabric.

Apple added that a fabric item may include a control circuit that collects user input from the input circuitry. Fabric items may have weights in the case to orient the case in a good position when it rests on a surface.

Rice University researchers also revealed shirts made of smart fabrics that could be used to monitor heart rate.

TechTimesLifeHack: A Guide to Smart Lights , How They Work, Features, and More! Things to know before buying